intermediate
Hyper-bitcoinization is the inflection point at which Bitcoin becomes the default value system of the world.
previous page main crypto glossary
saveLog in to save this entry. [coming soon]

Hyperbitcoinization is a state where Bitcoin

As more individuals and groups around the world realize the advantages of a borderless, censorship-resistant and natively digital system for transacting value, a critical mass of users will eventually fuel currency demonetization and the replacement of our world’s ingrained financial institutions and world powers with a more equitable, publicly-driven system.

Because this is such a foundational change for our world, definitions of hyperbitcoinization are wide-ranging and all-encompassing.

Bitcoin Bitcoin is a decentralized digital currency that can be sent from user to user on the peer-to-peer bitcoin network without the need for intermediaries.Learn more will begin to assume money’s traditional roles and gain institutional and government support. It will become all money and form the backbone of a new global economy.
Share This

Better to die fighting for freedom then be a prisoner all the days of your life. 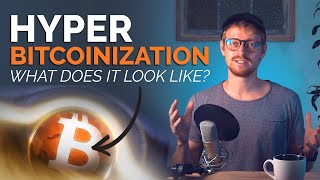 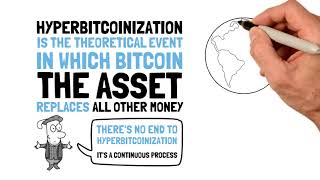 Bitcoin’s price curve will not be S-shaped

The Fiat Standard is Saifedean Ammous’s attempt to explain the technology behind the current analog global monetary system.
$ 30.00

The cap is 100% cotton. It sports an adjustable metal buckle closure and is designed to fit most adults. It additionally has soft inner sweatband linings, is well ventilated and lightweight.
$ 12.95