#FAQTHEFUD
Learn the truth
I

When a new technology is introduced, many are quick to say, “See it’s not working, it’s slow, or it doesn’t work as well.”

This is not new. This happens every time you have a new technology that is disruptive. At first, it is bound to use the outdated infrastructure which was intended for something else. This creates conflict, a pressure that can lead to an infrastructure inversion.

When automobiles were first introduced, it didn’t immediately catch on. People were used to horses as it was a reliable mode of transport for hundreds of years.

The new technology was met with resistance. The early cars were often stuck in mud or broke down easily because of unpaved, bumpy roads.

And people laughed at cars, as they saw that it was unreliable and expensive. The lack of gas stations was also a major factor at first. All these changed in time. Roads became paved and cars became the main mode of transport.

When you introduce a disruptive technology Gartner Hype Cycles provide a graphic representation of the maturity and adoption of technologies and applications, and how they are potentially relevant to solving real business problems and exploiting new opportunities.Learn more, you meet resistance. Resistance is the first reaction. The ones who succeed are the ones who continue-even though the rest of society tells them they’re crazy. In the beginning, disruptive technology has to live in a world created for the technology it’s replacing.

Infrastructure inversion is when you start with the new technology living on the old infrastructure and then, it flips.

You and I come by road or rail, but economists travel on infrastructure. 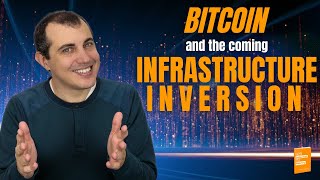 Bitcoin and the coming “Infrastructure Inversion”