beginner
Meme coins are cryptocurrencies inspired by memes and internet jokes. Dogecoin, for example, is inspired by the Doge meme created from a viral photo of a Shiba Inu.
previous page main crypto glossary
saveLog in to save this entry.

Most people are familiar with Bitcoin

Dogecoin9$ 0.0897630.61%5.10%1.81%details have gained a massive following over the years, prompting a slew of copycats, including Dogecoin-derivatives Shiba Inu

So, should meme coins be taken seriously?

In a nutshell, meme coins are cryptocurrencies inspired by memes and internet jokes.

Introduced in 2013, meme coins are usually crypto projects built around meme-worthy themes and animals. For instance, dogecoin (DOGE), the first-ever meme coin, was inspired by the Shiba Inu (a breed of hunting dog developed in Japan) meme sensation (a picture of a presumably smiling Shiba Inu dog) that swept the internet in the early 2010s.

Unlike traditional cryptocurrencies, meme coins are not usually judged based on the utility they provide to users. Instead, more emphasis is placed on the coin’s capability to attract high community engagement. In essence, virality is the single most important factor required to gauge the success of meme coins.

Once it gets popular and spikes in value, retail investors sometimes jump on board and further boost the coin. Prominent online figures and celebrities also drive up the popularity of certain meme coins. Elon Musk is probably the person most famous for it, and there’s even a fork of Dogecoin called Floki Inu based on Musk’s actual pet dog.

Meme coins often have a very high or unlimited supply. Unlike Bitcoin, which was programmed to have a finite number of units available to mine, meme coins will often have billions of units in circulation. Meme coins also don’t typically have a mechanism that “burns” coins, or removes them from circulation permanently, so the numbers just keep rising.

It’s also possible for just about anyone to make meme coins now, thanks to software that does most of the heavy lifting for you. The minimal effort lends itself to the meme-like quality of these coins, as they can be turned out quickly to suit whatever topic is trending.

Although emphasis is not placed on utility, it is a good sign when the community backing the meme coin project shares something in common, apart from the desire to generate profits. It is a red flag when the entire community’s goal is to pump the value of the coin by encouraging new investors to buy the token hoping that it will drive the price even higher.

Risks of Investing in Meme Coins Since they are largely dependent on community sentiment and arbitrary outside influences like celebrity tweets, meme coin pricing is incredibly volatile. While this means the value of a certain meme coin could drastically increase, as it did with Dogecoin, it could also crash very quickly if and when the community loses interest and moves on.

Some people have also created viral cryptocurrencies in order to scam people out of money. Taking advantage of the viral popularity of Netflix drama Squid Game, a Squid GameSquid Game-based coin increased millions of percentage points in value to a peak of over $2,000 USD per coin before the creators sold off their units and disappeared with everyone’s money.

Many meme coins also aren’t backed by the same technology as established cryptocurrencies like Bitcoin, nor do they have any established ecosystem to support them. Of the meme coins that are currently popular, only two use tested blockchains: Dogecoin’s protocol is based on Litecoin, and Shiba Inu was built on the Ethereum blockchain.

Most of them are also largely valueless outside the cryptocurrency world; no one accepts SafeMoon as a form of payment for goods and services, for example. Because of their topical nature, it’s unlikely that most of the meme coins being created will still be around in a couple of years. Even if they are, their value will probably be next to zero.

Those familiar with the crypto industry know that reputation is a vital factor to consider when determining the viability of a product or platform. Hence, it is advisable to unravel the identities of the core contributors of the project and their track records. Note that it may be impossible to find information about the members of the development team due to their decision to remain anonymous. In such cases, you can base your research on the design decisions of the team, especially tokenomics Tokenomics is the study of how cryptocurrencies work within the broader ecosystem and refers to a token’s quality and anything that impacts its value.Learn more.

While it is possible to make money investing in meme coins, it’s never a sure thing. These cryptocurrencies are even more volatile than their mainstream counterparts and can plummet in value overnight.

Just as you would any other financial investment, do your research before purchasing meme coins. If the coin has no background and information on it is hard to find, beware. Even the most hyped currency could end up being a scam in the end. Lack of a whitepaper or established ecosystem can be a warning sign, as can a whitepaper riddled with typos and vague claims.

That said, given how inexpensive they tend to be, you can still buy a fair amount with a very modest investment. Just understand that you can probably only expect a return on investment of a few bucks. Whatever you decide to do, never spend more than you can afford to lose.

What Is a Meme Coin and How Do They Work?by John Bogna

Gambling has brought our family together. We had to move to a smaller house.

Everything You Need to Know About Meme Coins 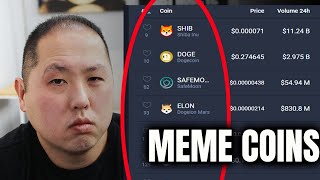 Why are meme coins so hot?

The innovative investor’s guide to an entirely new asset class—from two experts on the cutting edge.
$ 26.70

The Dogecoin stickers are made of high-grade PVC material, they are waterproof and fade-resistant and can be repeatedly pasted without leaving any residue.
$ 5.29

Bitconnect was an investment lending platform operating in the crypto sector, known for developing a classic Ponzi scheme.
$ 17.99