advanced
With Proof of Stake (POS), cryptocurrency miners can mine or validate block transactions based on the amount of coins a miner holds.
previous page main crypto glossary
saveLog in to save this entry.

The Proof of Stake (PoS) concept states that a person can mine or validate block transactions according to how many coins they hold. This means that the more coins owned by a miner, the more mining power they have.

Proof of Stake (POS) was created as an alternative to Proof of Work (POW) Proof of work (PoW) is a decentralized consensus mechanism that requires members of a network to expend effort solving an arbitrary mathematical puzzle to prevent anybody from gaming the system.Learn more, which is the original consensus algorithm in Blockchain technology, used to confirm transactions and add new blocks to the chain.

Proof of Work (POW) requires huge amounts of energy, with miners needing to sell their coins to ultimately foot the bill; Proof of Stake (PoS) gives mining power based on the percentage of coins held by a miner.

Proof of Stake (POS) is seen as less risky in terms of the potential for miners to attack the network, as it structures compensation in a way that makes an attack less advantageous for the miner.

Proof of Work vs Proof of Stakeby Dan Held 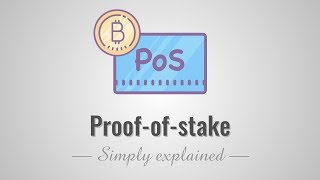 If you want to learn more about cryptocurrencies and whether the opportunity is worth it, then this book will definitely help you make an informed decision!
$ 12.99