advanced
Proof of work (PoW) is a decentralized consensus mechanism that requires members of a network to expend effort solving an arbitrary mathematical puzzle to prevent anybody from gaming the system.
previous page main crypto glossary
saveLog in to save this entry.

Proof of work (PoW) is a form of cryptographic zero-knowledge proof in which one party (the prover) proves to others (the verifiers) that a certain amount of computational effort has been expended for some purpose. Verifiers can subsequently confirm this expenditure with minimal effort on their part.

The concept was invented by Cynthia Dwork and Moni Naor in 1993 as a way to deter denial-of-service attacks and other service abuses such as spam on a network by requiring some work from a service requester, usually meaning processing time by a computer.

The term “proof of work” was first coined and formalized in a 1999 paper by Markus Jakobsson and Ari Juels. Proof of work was later popularized by Bitcoin

Bitcoin1$ 16,503.020.18%-6.01%-15.89%details as a foundation for consensus in permissionless blockchains and cryptocurrencies, in which miners compete to append blocks and mint new currency, each miner experiencing a success probability proportional to their computational effort expended.

PoW and PoS (proof of stake) With Proof of Stake (POS), cryptocurrency miners can mine or validate block transactions based on the amount of coins a miner holds.Learn more are the two best known Sybil deterrence mechanisms. In the context of cryptocurrencies, they are the most common mechanisms.

A key feature of proof-of-work schemes is their asymmetry: the work must be moderately hard (yet feasible) on the prover or requester side but easy to check for the verifier or service provider. This idea is also known as a CPU cost function, client puzzle, computational puzzle, or CPU pricing function.

Proof of Work vs Proof of Stakeby Dan Held

If you reveal your secrets to the wind, you should not blame the wind for revealing them to the trees. 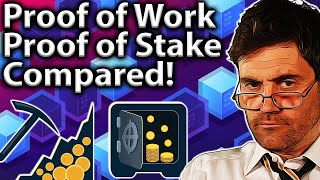 Proof of Work vs. Proof of Stake: Beginner’s Guide 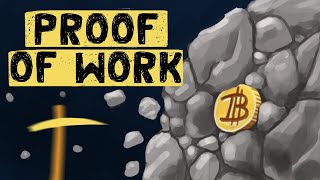 What is Proof of Work?

Sleek and fashionable Satoshi Nakamoto T-Shirt with crew-neck and a regular fit. 100% Cotton. Made in Germany.
$ 19.99