intermediate
A seed phrase is a series of words generated by your cryptocurrency wallet that give you access to the crypto associated with that wallet.
previous page main crypto glossary
saveLog in to save this entry. [coming soon]

Think of a wallet as being similar to a password manager for crypto, and the seed phrase as being like the master password. As long as you have your seed phrase, you’ll have access to all of the crypto associated with the wallet that generated the phrase — even if you delete or lose the wallet.

You should be able to access your crypto without having to prove your identity, and you shouldn’t have to rely on a bank Fractional reserve banking is a system in which only a fraction of bank deposits are backed by actual cash on hand and available for withdrawal.Learn more or other institution to store it safely.

Ethereum2$ 1,894.74-0.24%-0.90%12.26%details use to accomplish this is the blockchain A blockchain is a digital ledger of transactions that works from a decentralized network.Learn more — which both stores and secures your crypto using a peer-to-peer network of computers spread around the world.

How does the blockchain know which crypto is yours? It uses algorithmically generated password-like codes that only the holder has access to. When you first set up a crypto wallet, it generates a string of simple words, which is your seed phrase (a.k.a. a Recovery Phrase). The wallet also uses the seed to create private keys — which allow you to send or spend your crypto.

You’ll often hear the terms mnemonic seed or mnemonic phrase used to describe seed phrases as they imply that the phrase needs to be memorized. Introduced in Bitcoin with BIP39, seed phrases provide users with an easier way of backing up their wallets. If you’ve used a wallet previously, you’ve likely been prompted to write down 12-24 random words like the following:

Your seed phrase unlocks your wallet, along with the private keys associated with all the crypto in the wallet.

Seed phrases – as opposed to private keys – leave less room for human error when it comes to backups, as they’re easier to record and transmit. Better still, they’re capable of generating not just one, but a colossal amount of keys from a master one. This allows users to avoid address reuse as, with a single seed, they can create a seemingly infinite number of receiving addresses.

Bitcoin seeds provide a way for users to restore their balances in the event that their cryptocurrency wallet becomes lost, stolen, or damaged. The wallet holder can open a new wallet and use their old seed phrase to get their coins back.

It’s important to never share the seed phrase with anyone. Anyone who knows the wallet seed can access all of the coins in that wallet and steal them forever. There is no legitimate reason that anyone could need your seed phrase, so if someone asks for it, you can be sure it’s a scam.

How to Use a Bitcoin Seed Phrase

Using the seed phrase is pretty easy. Imagine someone had a hardware wallet and lost it. All they have to do is get a new one and import their seed phrase. The wallet software will then restore their previous balances.

How is a Bitcoin Seed Different from a Private Key?

A Bitcoin seed can be thought of as a backup for the private key to a wallet. The seed phrase enables a wallet to derive your private key.

A private key to a cryptocurrency wallet is the equivalent of an ATM PIN to a bank account. Bank accounts have a unique PIN, which proves to the ATM that a user owns the account. Using the PIN, anyone can spend funds from the account.

In a similar manner, private keys prove to the Bitcoin network that an individual owns a certain amount of Bitcoin and can spend them.

A seed phrase provides an easy way for people to store and retrieve their private keys. Seed phrases and private keys aren’t the same thing, although both allow someone to spend the coins in a given wallet. Wallets can derive private keys from a Bitcoin seed phrase.

What is a seed phrase?on Coinbase

What Is a Bitcoin Seed Phrase? Seeds vs. Private Keysby Brian Nibley 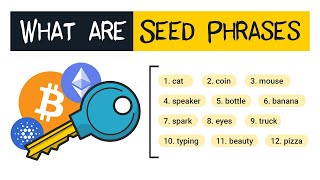 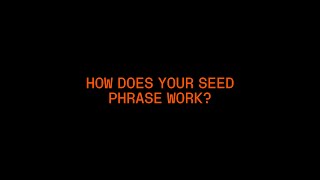 How Does Your Seed Phrase Work?