beginner
Stablecoins are a type of cryptocurrency linked to an asset like the U.S. dollar that doesn’t change much in value.
previous page main crypto glossary
saveLog in to save this entry. [coming soon]

Stablecoins are a type of cryptocurrency linked to an asset like the U.S. dollar Fiat money is a government-issued currency that is not backed by a physical commodity but rather by the government that issued it.Learn more that doesn’t change much in value.

The majority of the dozens of stablecoins that currently exist use the dollar as their benchmark asset, but many are also pegged to other fiat currencies issued by governments like the euro and yen. As a result, the price of stablecoins fluctuates very little, unlike high-profile cryptocurrencies like Bitcoin

Originally, stablecoins were primarily used to buy other cryptocurrencies, like bitcoin, because many cryptocurrency exchanges didn’t have access to traditional banking. They are more useful than country-issued currencies because you can use them 24 hours a day, seven days a week, anywhere in the world – without relying on banks. Money transfers take seconds to complete.

Another useful feature of stablecoins is that they can work with so-called smart contracts Smart contracts are simply programs stored on a blockchain that run when predetermined conditions are met.Learn more on blockchains, which, unlike conventional contracts, require no legal authority to be executed.

The code in the software automatically dictates the terms of the agreement and how and when money will be transferred. This makes stablecoins programmable in ways that dollars can’t be.

What Is a Stablecoin?on Investopedia

What are stablecoins? A blockchain expert explainson Theconversation

The benefits from a world currency would be enormous. 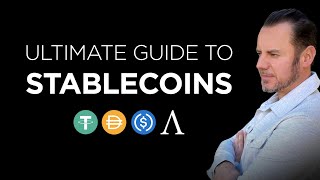 The Fiat Standard is Saifedean Ammous’s attempt to explain the technology behind the current analog global monetary system.
$ 30.00

Some experts say that Bitcoin and cryptocurrencies are just a scam; others say they're "the most important invention since the internet." It's hard to tell who's right. Authored by Silicon Valley leaders from Google, Microsoft, and Facebook, Bubble or Revolution cuts through...
$ 17.93

How to DeFi: Advanced